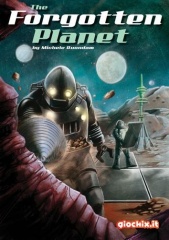 Offizielle engl. Infos zum Spiel:
The search for the energetic crystals continue restless all around the universe! The merchant Guild is ready to pay outrageous amount of money and all the Seekers roam around to find them.
Breaking News! The Forgotten Planet's surface, on the edge of galaxy, is full of them.
In few days a new gold's race begins, where men are replaced by robots, that search, explore and fight among them to control the precious mineral.

The Forgotten Planet is a tile placing game, where the player, using their robots, try to expand their control on the planet's surface, even stealing parts of it from other players.
The robots are used not only to build and extract the minerals but also to fight and destroy.

Each player is a space mining Seeker that try to get the favour of the powerful Intergalactic Merchant Mining Guild. To do that, try to get the control of the Forgotten Planet surface in order to prepare the following mining settlement. The best player will be chosen and rewarded by the Guild winning the game.
Players score Victory Points (VP), which represent the favour that players get with the Guild thanks to their work on the Forgotten Planet.
In order to achieve VP, a player has to develop a mining base as large as possible and he has to open and use crystal mines. Players do that placing tiles around their Control Centre and moving their robots over the tiles.
It’s also possible stole part of mining base to another player, attack and destroy tiles, build walls.
A player will receive VPs at the end of the game proportionally to the extension of his controlled land. Other VPs will can be assigned producing and selling crystals or controlling special mines.