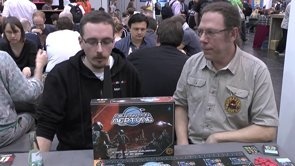 Destination: Neptune shows an optimistic vision of commercial space exploration in the next century. Players control an organization with the resources and intent to explore, develop, and colonize the worlds beyond Earth. Organizations that practice careful planning and resource management, with a healthy dose of technology research will succeed. Destination: Neptune moves through four generations of space exploration. Players earn Victory Points by building large commercial outposts and colonies, as well as from fame and outright purchases. After four generations, the player with the most Victory Points wins the game.

Players must use the cards to gain currency and fuel in order to launch space missions to establish bases, factories and colonies on various locations within our solar system. Careful hand and resource management is key to winning the game. In addition, players also need to research certain technologies in order to build on most locations. Technologies are researched through card play and paying currency. The cards are separated into 4 piles which are separate generations. At the end of each generation, each player scores points for the various structures they've built. The game ends when all generation piles have been exhausted. (Quelle: BGG)