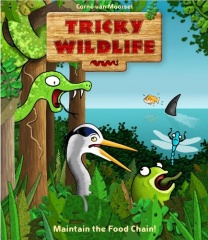 Offizielle Infos:
In Tricky Wildlife, each of the players is a wildlife manager who's trying to keep many different animal species in his wildlife park, while also preserving the food chain of predators and prey and helping endangered species.

The food chain of animals has top predators who eat the lower predators, who in turn eat the next species down the "animal pyramid", who in turn eats the lowest prey – for example: Sharks eat Penguins, Penguins eat Fish, Fish eat Shrimp. Missing a prey animal means that the higher animal type starves, which gives you penalty points as a wildlife manager. Thus, you want to maintain all species in your wildlife park, especially the rarest species as they give you prestige points.

In each of the eight game years (i.e., rounds), you can add 1 or 2 animal groups to your park; each group first consists of 1-4 animals of one species. When you attract them to your park, these are young animals. They can grow old and die naturally after five years, but to do this they need enough prey to feed on during their lifetime. Otherwise they starve. At the same time, higher predators in the food chain can eat these animals.

An animal's age is shown by its location on your lifetime track, which uses four sticks to divide the track into five sections (i.e., years). After each year, you shift your rightmost stick to the leftmost side, which ages all of your animals by one year.

When you don't have all four different species, you gain one penalty point per missing species (and higher level animals may starve). If you have the most (or second-most) of an animal which was rare before, you score 1-2 prestige points. After year eight, you add the number of your animal groups to your prestige point total to calculate your final score.

The challenge in Tricky Wildlife is to balance your desire for prestige points with the need to preserve your complete food chain.