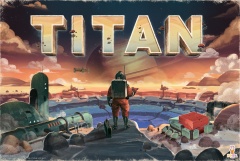 Humanity is at a turning point and preparing to expand outside the solar system, which has become too small for its development. A gigantic ringed city has been built around Titan, Saturn's satellite, and mining corporations have begun to exploit its huge reserves of resources.

Titan is an expert network-building and worker placement game, a complex puzzle that is played out on a spectacular 3D board. You represent one of these corporations, whose ship has just connected to one of the space elevators of the city ring. Your base, located on the surface, is ready to harvest the resources transported by your network of extraction pipes, as well as by your teams of drones working in this inhospitable environment.

Corporations must use their drones astutely and expand their network of extraction pipes to activate previously installed buildings. Race against other players to fill your holds with the most precious resources, and act quickly to prevent your cargo from becoming polluted.

The ISA, or International Space Agency, has set development goals for you that will improve your reputation if you respond as quickly as possible. The city ring, on the other hand, makes the most of your presence to obtain resources through orders placed each turn.

You can exploit Titan's different buildings by using your control robots, which will give you special bonuses and allow you to accelerate your development.

At the end of the game the player with the most victory points wins!