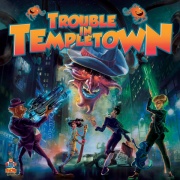 Trouble in Templetown is an immersive cooperative & competitive game (1-4 players) wherein you take the role of White Cell Agents, fighting against assaulting germs and viruses. Your mission is to keep the germs in check while building enough immunity walls to insulate Stanley from the spreading infection.
Fail at that, and you'll have one last shot at saving his life by taking on the virus behind this whole thing in an all-or-nothing face-off…"

In Trouble in Templetown, your goal is to prevent parasites, bacteria, and other nasty invaders from taking over the city. As a cooperative game, you’ll need to work together with other players to secure Districts by building Immunity Walls or take the Enemies down in one fell swoop by defeating Frankie Bola, the dangerous kingpin Virus threatening Templetown.

Defeat the Enemies by either building Immunity Walls in Districts equal to the number of players OR by defeating Frankie Bola, the deadly virus boss.
There are 3 types of Enemies you’ll face in Templetown:

Lazy Parasites spawn and stay in a single Zone, laying Eggs in adjacent Intersections.
Wandering Bacteria move between Zones and leave Eggs behind as they go.
And Frankie Bola moves secretly, leaving special Eggs until cornered and revealed.

Each round, you are dealt up to 6 Action Cards and by combining them you can optimize your actions: move around the city, construct an Immunity Wall or Cure a Bacteria or a Parasite.
Action cards are used to generate action points (AP), which you’ll use on your turn to complete various actions. There are 3 types of AP: (add visual for the 4 action symbols)

Move AP (blue) are used to move between Districts, Intersections, and Zones.
Build AP (green) are used to construct Immunity Blocks and Defense Towers.
And Cure AP (red) are used to remove Enemies.

On Action cards, there are 2 symbols, each with a number. These indicate the type and quantity of AP that the card generates. You may use either of the 2 symbols, but not both.

Action cards with a “wild” symbol may be used as any type of AP.