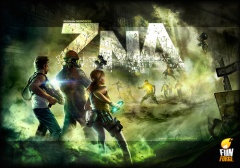 
ZNA is a cooperative survival boardgame in a unique post-apocalyptic setting.

The city has been struck by a storm of dark smoke that the inhabitants will later call “the Fog”. This fog destroys everything in its path, leaving behind it a world plunged into chaos. Nobody knows the exact extent of the damage. The Fog concentrates as it settles over the areas it hits, making them dangerous, almost impassable, and infested with threatening mutants.

Indeed, the vast majority of the population seems to have been infected by the Fog. Those who were not killed have been contaminated to the point of transforming into violent and ruthless creatures with superhuman abilities. Their only motivation appears to be the constant hunt of the survivors.

Will you survive the Fog, unpredictable and ever changing, throughout the 12 scenarios of the game? Getting out of this tainted and contaminated Boston will not be an easy task.

Embody one of the brave survivors of the cataclysm: John (“The Eye”), the criminal with unerring accuracy; B-Mama, the paranoid, baseball-bat-wielding couch potato in need of anger management; Smokey, the specialist in maintaining the more dangerous parts of the city’s underbelly; or Mia, the prodigy chemistry student.

Together, you will progress across the modular gameboard, searching for equipment, swapping objects with one another, looting chemical storage facilities in order to mix up concoctions for various uses, and most of all, fight the Fog and the mutants it created.

Be careful where you step: The Fog is thicker in some more contaminated areas, rife with mutants — stronger mutants. In order to avoid contamination, or a worse fate, you will also need to anticipate what surprises the Fog holds for you next, as you search or fumble through the map tiles darkened by its presence.

By making use of clandestine Bio-Hacker labs, you will be able to create cocktails of chemical reagents to suit any purpose: decontaminating areas; healing or decontaminating yourselves; attacking, freezing, confusing, or even controlling mutants! Best of all, though, is to kill them before they can fight back through nasty dice combos and special abilities, such as accelerated mutation, teleportation, regeneration, or contamination.

Discover the different game modes: Adventure, Siege, Escape, and all their original mechanisms.

Survive an epic story in a devastated urban environment.