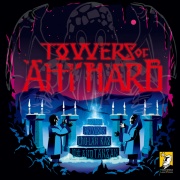 Ages ago, before history, before humans walked the earth, ancient beings ruled the darkest corners of the cosmos from beyond. Their earliest followers harnessed fragments of their immeasurable power in earthly objects. Chaos and destruction spread throughout the land leaving no family untouched by darkness. A great war ensued and these once great objects of cosmic power became lost and forgotten in time…

You lied to the other scientists on the expedition to Am’harb, an uninhabited island in the Pacific. Only you, a true servant of the Ancient Ones, is powerful enough to move the deadly dark towers surrounding the island.

Manipulate the towers to strategically scatter your priests and cultists around the island and gain control of the dark altars. Excavate esoteric resources left behind by lost civilizations. Wisely exchange them for the cosmic powers of the Ancient One to advance your position.

Can you solve the Towers of Am’harb and unlock the secrets before your rivals? Do this before the other cults to ensure you and you alone lead humanity from the deadly light and into the peace and safety of a new dark age!

In Towers of Am’harb, you are a leader of a doom cult, and you are competing with others just like you, all trying to unleash the Ancient One of their worship to conquer the world!

Players will take turns moving their set of 4 different sized discs, manipulating them according to the rules of the mathematical puzzle toy Tower of Hanoi/Brahma. Then you send your followers(disciples) to the 2 columns you just moved a disc into, in order to gain control of scoring altars that provide doom points at the end of the game. Your followers come in different sizes, 3 priests which provides 3 influence, and 6 cultists which provides 1 influence; each follower spreads influence to the 8 surrounding spaces, so it can influence more than one altar.

Since players will sit and play their discs on different orthogonal sides of the map, the result is that the vertical columns you can play into will be the horizontal rows of the next player, and generates to very interesting interactions. When playing your followers on to the board, you will need also to pay a cost depending on how crowded the area you are entering, which can be offset by the height of your towers, so you must plan ahead on where you need to concentrate your efforts.

There are 8 different Lovecraftian Ancient Ones to worship in this game, each with a different Cosmic Power for players to rely on. The map is made from dual-sided modular boards, with different layouts for 2/3/4 player scaling; you can start with symmetric distribution of scoring altars, or flip them around for dynamic asymmetric layouts.

The game ends when the first player plays all 9 of their followers to the board, then all other players gets to take one more turn. Then players resolves each altar on the board one by one and give out doom points to the players with highest influence. The player who accumulates the highest doom points awakens the Ancient One of their worship, and releases unfathomable cosmic horror upon the world.