"Catan - The movie" is coming! 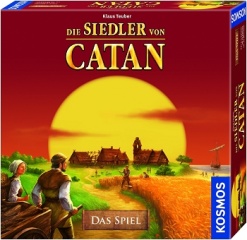 "The Settlers of Catan, the hit board game, is headed to the big screen. Producer Gail Katz (Pawn Sacrifice, The Perfect Storm) has obtained film and television rights through her Gail Katz Productions banner.

Created by Klaus Teuber, the multiplayer strategy game sees players attempt to create the dominant community on the ever-changing fictional island of Catan. Settlers must outwit one another amidst fierce competition for the island’s scarce resources.

“I’ve been wanting to see an adaptation of the game for years,” says Katz, “ever since my ‘Catan’-obsessed college-aged kids introduced me to it. The island of Catan is a vivid, visual, exciting and timeless world with classic themes and moral challenges that resonate today. There is a tremendous opportunity to take what people love about the game and its mythology as a starting point for the narrative.”

“We are thrilled to be working with Gail on ‘The Settlers of Catan,’” said Guido Teuber, Managing Director of Catan, Inc. “Catan players are a diverse and dedicated group who are drawn in by the game’s social interaction and strategy. We owe it to the fans all over the world to make sure any CATAN content created lives up to what they have come to expect of the ‘Catan’ brand. We are confident that our partnership with Gail will take us there.”

The Settlers of Catan is currently available in over 30 languages and 50 countries around the world and has sold over 22 million board games."