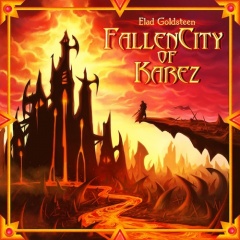 Bereits im Vorfeld des Videos gab es bei uns eine Vorschau (engl.):
The city of Karez was once the crowned jewel in the vast kingdom of King Tyrial, but as he lost grasp on his kingdom, the city fell to ruins at the hands of the dark forces surrounding it. Now the king has died, and his heir, King Tyrial II, has decided to dispatch his finest lords to raise the fallen city and stand ground against all its enemies, within and outside the city walls.

In Fallen City of Karez, each player will take the role of a lord of one of the guilds who seek to tighten their grasp on the rising city. The players will strive to maintain a balance between keeping the city safe for its citizens by sending exploration parties to defeat any threats, and at the same time attracting to the emerging city new adventurers wishing to fill their pockets with fortunes and their names with glory.

In the action phase at the start of each of the eight turns, players can assign two citizens or one adventurer to act on their behalf in the various buildings of Karez, send an exploration party to remove any threats that lurk near Karez, or buy new equipment to reinforce their parties of heroes. Some guild houses may choose to erect their own private Dungeons (!) in an attempt to inflict havoc and dismay on the other houses. After everyone performs their actions, the players must check how these actions affected migration to Karez; the results of this phase will reflect on the growth of Karez towards a city state, which is the common aspiration of all players.

Players start with different initial possessions and owned buildings. In addition to the common goal of raising the city, each house also has some unique goals (ambitions), which will eventually determine the sole winner. That said, the game is semi-cooperative in that while each guild has its own ambitions, all players must succeed in raising the city by the end of the game or else everyone loses.