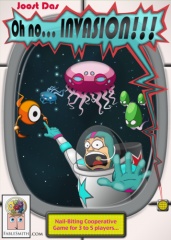 offizielle Infos:
Oh no... INVASION!!! is a cooperative game about a small community of Space Stations in some odd corner of the galaxy. The players star as the captains of these Stations who see their peace and quiet rudely disrupted when a Class-A Spawnmonster suddenly appears in their midst. This monstrous alien has nothing but bad intentions and starts spewing out waves and waves of aliens. Players have little choice but to stop panicking and start fighting. Working together closely exchanging weapons, zapping aliens, and building a smart infrastructure is the only way to stay alive.

But fighting off the hordes of aliens alone won't cut it. At a certain point, the players will have to face the vicious Spawnmonster herself. When this Final Conflict takes place is entirely up to the players. Don't do this too early, or you will be unprepared. Don't wait too long, or the Spawnmonster will have grown too powerful for you to confront her and live to tell your grandchildren about it.

To build up your defenses, you draw cards from a Resistance deck that contains weapons and Modules. Add the Modules to your Space Station to make it more efficient. Use the right combination of weapons to rid your Space Station from the ever-growing alien presence – but choose your actions wisely! For every action you use to build, the Spawnmonster sends out another of her brood to the Space Stations, sometimes with deadly consequences...