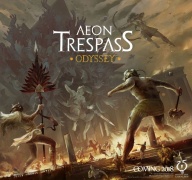 Set in an alternate Antiquity, where a reality-shattering cataclysm killed the Olympian gods and unleashed the otherworldly Primordials, Aeon Trespass: Odyssey places the players in the roles of Argonauts, the only people who can fight off the darkness and make things right.

Take control of the Argo and its crew, train them and send them on adventures into the dangerous and mysterious lands of Ancient Greece (and beyond...). Learn the world's secrets and create new technologies that will give you an edge in combat - and outside of it. Manage your resources and develop your base of operations. Build new Facilities, craft new Weapons and equipment. Gather allies and forge political alliances with the world’s factions. And, most important of all, tame the Titans, arm them, evolve them and ride them to battle with the fearsome Primordials.

You win by defeating the main villains or solving a crisis, you lose if your Argonauts die, your crew abandons you, your ship gets destroyed, the villains fulfill their plot or time runs out. There are many ways to lose, but only a handful paths to victory.

During Battles, 1 to 4 players must cooperate to defeat 1 giant Primordial boss-type monster controlled by a sophisticated AI system.

Outside of Battles, Aeon Trespass: Odyssey uses choice chain and choice matrix mechanics to track your decisions throughout the game. Those decisions matter and will have a drastic impact on all future play sessions, campaigns and playthroughs.