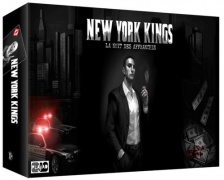 
Each player in New York Kings plays the role of a wiseguy who will participate in the most memorable night in the history of the mafia. The New York King's throne is vacant. Rather than collapsing into fights between families, each family will send his or her best wiseguy into the city and its suburbs to find out who has more moxie, and in turn which family will rise. Money talks in this world, so the only goal in this game is to prove your wiseguy's worth by making the most money you can in one night. In simpler game terms, the player with the most money at the end of the game will be the new King of New York.

The game board represents the connected districts of the city of Manhattan. During the game, missions will be available to different players. These mission smartphone cards show how many characters are necessary for its implementation, the location where the mission may be accepted and where it must be completed, whether or not it is a dangerous mission (NYPD watch!), and of course the amount of money you can make.

During your turn you will begin a phase of corruption. Each player secretly tries to buy the first position player AND the right to control the police. Then players pick "resources" cards, which will be used to generate events or increase movements. Next, each player moves his characters — his wiseguy and his henchmen — then plays the actions he choose. Players can accept a mission, complete a mission, provoke opposing characters, or try to recruit new henchmen.

Provocation is a kind of "Texas Hold'em" poker duel with die. You first bet, then throw three dice (the "flop"). Either one folds and loses his bet down or the provocation goes on until the shootout (fifth dice). Just like in poker, the weaker hand loses the pot and one of his characters.

When a character or characters are stopped by the police during a dangerous mission, these situations are also managed through die rolls.