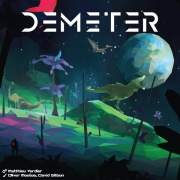 Demeter is a standalone flip-and-write game that features the same graphic style and is set in the same universe as the publisher's earlier game Ganymede.

You are a scientist and you just boarded a ship departing from Ganymede to Demeter 1. Demeter, a red dwarf planet, has two twin moons: Demeter 1 and Demeter 2. Each of them has an ESI (Earth Similarity Index) of 0,98 and the first reconnaissance flight revealed the presence of dinosaurs on Demeter 1. Chahrazad will lead this new expedition as it is now your turn to explore and discover the secrets of the first moon of Demeter!

The goal of the game is to score the most MP (Mission Points). These points represent your ability to discover and to study the dinosaurs in their environment.