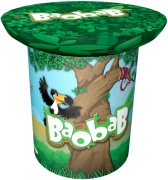 Baobab trees tend to have a tall skinny trunk with a flat top, but they don't grow that way by accident. That's how players build them!

In the dexterity game Baobab, a.k.a. Tumble Tree, players are dealt the 108 cards at random and cannot look at the cards in their deck. The tree trunk — which is the game container in many versions — is placed in the middle of the table with the lid on it. On a turn, a player announces that they'll play 1-3 cards, then they turn the cards over from their deck one by one, placing them on the tree as required by what's depicted on the card. If the card shows only foliage, then you can place it anywhere; if it shows a flower or monkey, then you must make the card hang over the edge so that the "ground" depicted on the card has no part of the tree underneath it. The snake must be placed between two other cards, the toucan tossed on top from a foot away, the leopard dropped straight onto the tree from a foot above, and the bat dropped onto the tree — but only after you close your eyes before extending your arm over the table! The beehive card can't be covered by anything except foliage and flowers, while the chameleon copies the card previously played.

If any cards fall off the tree while you're adding something to it, then you place those cards (and any cards that you've yet to place that turn) in a personal penalty pile. As soon as someone places their final card, the game ends. Players count the cards remaining in their deck with those in their penalty pile, and whoever has the fewest cards wins!