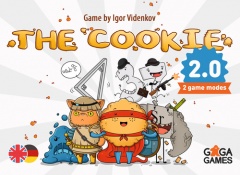 Playing The Cookie 2.0 you will try yourself as Alice in the Absurdland or as a double agent who has to hunt for his victim and kill it on the one hand and not to become a victim himself on the other. But the game itself is not that cruel as it sounds: the cutest characters and bright illustrations will always remind you about it. Deduction, bluff, surrealism, sweet insanity and a cookie for the first player are in set!

The Cookie 2.0 includes basic rules for 4-6 players from the original version of The Cookie but also an absolutely new 2-4 player mode. In “The Big Hunt” mode players will have to figure out which character’s head is a price is put on. Besides to the price you need to stay in the game.

Each round consists of three stages. During the first stage you need to announce your role in the game… but you can lie! It’s up to you to choose what to say but keep in mind that any of your decisions will give useful information to other players. During the second stage you can try to uncover the role of the player that lied (as you think). And finally, during the third stage all the players, based on the information received, attack the hidden target card, then it is revealed and the winner is decided. But pay attention to the fact that you can not only attack the target but also other players!

This game is pure insanity where bluffing skills and cold-blooded premeditation can help to win!