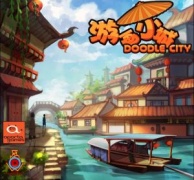 Shanghai also has hotels, with which you score points for the length of the road passing through the hotel (as in Doodle City), but again, each value can be scored by only one player.

There are no "wildcard dice" in Shanghai. Instead, when you choose dice that activate a park, you can draw in any space in that park's row; doing so costs you a tree.

At game's end, players score points for having made a large network of taxis and buses.