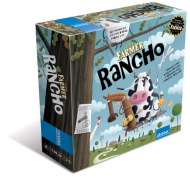 
The board game Rancho is the younger sister of the well-known and acclaimed game Super Farmer, which was designed by Karol Borsuk (an eminent Polish mathematician and professor at Warsaw University) in 1943 during World War II. After the Nazi occupation of Warsaw, the university was closed and the professor lost his job. He came up with the idea to sell the game to financially support his family. In occupied Warsaw, The Little Animal Farm – as the game was then known – became extremely popular. After the end of the war, the game was forgotten and it reappeared on store shelves only in the 1990s through Granna.

Rancho, designed by Michael Stajszczak, was made to honor the memory of Karol Borsuk and to commemorate the success of The Little Animal Farm, a.k.a. Super Farmer. Rancho expands the possibilities which Karol Borsuk's original game presented to players as now farmers must not only exchange their animals well and breed them, but also plan purchases of pastures on which to graze their herds.


In more detail, you breed animals in order to have the best ranch in the region. You buy pastures so that your animals will have a place to live. Your animals breed and this brings you profit. You can convert animals to other types of animals if you decide it's worth it, or you can buy more pastures to have space for more animals. To win, you must be the first to collect a herd consisting of at least a horse, a cow, a sheep, and a rabbit. But all your plans can go awry if you are not careful because in the nearby forest there are prowling predators, specifically a wolf and a fox. Your animals can easily become their prey...