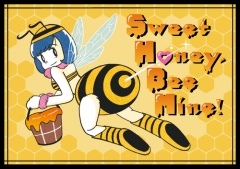 Sweet Honey, Bee Mine! is from Katsuya Kitano and New Board Game Party, creators of Who Soiled the Toilet? in 2016. This game combines bluffing, hand management, and your ability to be a jerk in one tidy package. In a round, each player starts with a hand of five cards, with the cards being similar to a Pairs deck (one 1, two 2s, up to ten 10s), but with some of the cards from 1-5 being labeled "low" and some from 6-10 being labeled "high"; if a card isn't labeled, then it can be anything from 1-10.

Each player reveals one card simultaneously, and whoever reveals the highest card starts. On a turn, the player choose one card from hand, places it face down with 1-3 honey chips on it, then draw a new card. The next player can either place the same number of chips on it to pass the card to the next player or take the card and chips; if the card matches a number the player already has, they are out of the round and must ante a number of chips equal to the card number to the pot. If no one takes the card, then whoever first played the card must take it, scoring lots of chips but killing themselves if they played a number they already had.

The round continues until a player has cards that sum to at least 35, they have three cards valued 1-5 in front of them, or they're the only one still in the round. That player wins the pot, then everyone scores points equal to the number of honey chips they have. After a certain number of rounds, whoever has the most points wins.