Surge: Battle for the Oleshky Sands 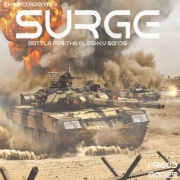 There is an unprecedented military build-up as a new front emerges in the Balkan States, with both the NATO and Russian superpowers vying for control. Forces are mobilizing in the region at an alarming rate with the UN summit deadline looming. There are skirmishes every day in different territories as both sides struggle for control. You have been tasked with securing the new front, and it's critical that you do this before the UN sanctioned ceasefire comes into effect stopping any further build-up. Under your command is a full complement of military assets that are battle ready. The terrain is a challenge, ranging from the desert like Oleshky Sands to the Codrii forests and beyond to the Balkan Mountains.

Surge: Battle for the Oleshky Sands is a two-player game of confrontation. Your mission is to deploy the assets as quickly as possible to neutralize the enemy and secure control of the region. To retain control of an area, you must have the most units in that area, and to control the region, you must control the most number of areas. There is a constant struggle to retain control of the different regions with battle lines moving quickly. No two games will ever play the same.