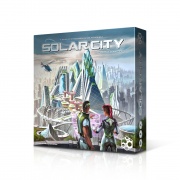 Humanity is on a brink of extinction and we can’t blame anyone but ourselves. Even despite all the warnings, we were still clogging our sky with smoke and dust driven by short sighted greed. Our planet once green and beautiful, keeps on turning into deathly gray colors.

That’s why the world’s brightest minds set into motion this great undertaking. The plan is to transform what we’ve already created, into something that would heal our poisoned world and ensure our survival. It’s in your hands to design the most efficiently working city, that will take us closer to salvation.
The game’s theme is strictly linked with the idea of solarpunk. The core concept is set around the state of the environment we live in. Increasing pollution might air and water to become luxury goods. The solution? Conscious urban planning to use city buildings to produce clean energy, oxygen, and water.

Various buildings are already being used in the real world in such manner and we can find examples like Bosco Verticale in Milan or Pasona Urban Farm in Tokyo.

Solar City is a game where players design the future city. In each turn players choose one of the 3 actions:

● Build a Skyscraper that will bring you profits in the moment of activation
● Build a Public Buildings, that will improve the city structures’ performance.
● Activate the Vertical Farm – cover the Skyscrapers in green, activate the wind turbines, release the water flow, install photovoltaic panels, transforming it into a real factory of bioenergy and oxygen.

Each action will activate a part of the city. The player who did that will get the profits from the buildings placed there and, more importantly, will block the possibility of activating this part of the city for the other players. This mechanic force players to adapt their strategy to new situations with each passing minute.

The game contains over a dozen different building types. In every game only six of the will be used. Additionally, the game contains random set of Public Buildings. Thanks to that, every Solar City game will be an unique experience.

The game takes place over the set number of rounds (depending on the player count) or up until the moment when one player fills their entire board. The winner is the one who contributed more to the positive change in worlds environment (gathered the most Oxygen Points).