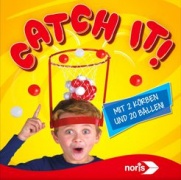 In Catch It!, each player has a basket on their head, and to start the game the two players throw the twenty balls in the air, trying to catch as many white balls as possible. As the balls land, both players try to grab them, throwing the white balls (underhanded) into their own basket and the red balls (again, underhanded) in their opponent's basket. Feel free to dodge those unwanted balls! Once all the balls have placed in the nets, or the players collapse from exhaustion, players tally their scores — number of white balls minus number of red — to see who wins.

With more than two players, each pairing of players competes once to see who wins the most rounds.