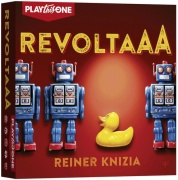 Revolution is the key word, and the question is which side will prevail? Ducks or robots? Choose your side carefully because in the end it determines how many real points you've won!

RevoltaaA consists of a 66-card deck, with 7×0, 6×1, 5×2, 5×3, 5×4, and 5×5 cards in both ducks (red) and robots (blue). Each player starts with 11 cards in hand, and 11 cards are placed in a deck on the table. Each round, reveal the top card of the deck; each player then selects one card from hand and reveals them simultaneously. Whichever side - duck or robot — has the highest sum has won the round, and whoever has played the lowest card of this side wins these cards. (In a tie for lowest, the next lowest card of this side wins; if no cards of the winning side are unique, then the deck wins.) The winner stacks these cards and places a card of the winning side on top of this stack, then a new round begins.

As soon as a side has won four times, the game ends with this side being victorious. Each player scores one point for each stack in front of them that shows this side and one point for each card of this side still in hand. Whoever has the most points wins! (Alternatively, play a number of games equal to the number of players and sum your points over those games.)

RevoltaaA includes a "bananas" variant in which the face-down deck is not used and cards aren't played simultaneously. Instead one player leads a card face up, then each player lays down a card in turn, with the winner being chosen the same way and the first player breaking ties. The winner of one round leads the next, and points are scored as in the original game.