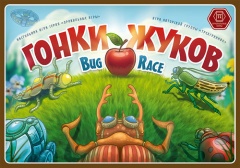 
Bug racers have come to compete from all over the world, and the first one to cross the finish line will become globally famous. Moreover, the winner will gain interplanetary fame as for the first time in the Grand Bug Races, robobugs from the space station will participate in the next stage of the competition.

Bug Race is an easy to master but still captivates as a dynamic board game race for 2-4 players from 8 years old. Each player leads his own bug to victory moving its legs one after another. Of course, legs shouldn’t be torn off the body or tangle with each other. When a bug passes all 9 levels of the playing field and crosses the finish line first, its owner wins the game.

Each bug consists of 7 elements, body and 6 legs, and runs at its own track, divided into sections. There are special notches for the bug’s legs, gashed on the each side of the track. Body, that covers three sections, is placed at the track between the legs. “Losing” legs is permitted: each leg should touch the body at least diagonally all the time. So the bug can not stretch for more than 5 sections.

When the game begins, players place their bugs at the start positions – the three first sections of the track. Tracks cross at the middle of the table and connected by the central element with the race aim on it. They are not bonded hard so players don’t pull others’ tracks while moving their own bugs. If needed, in case of lack of free space on the table for example, playing is possible without a center element. And of cause you don’t need extra tracks if there are less than 4 players.

Moving bugs is performed by using special cards. Each of them allows to move 2 or 3 legs, a front left and a middle right, for example. In the beginning of each round players draw two of such cards from the stack. One of them stays at the hand and another one goes to the next player. Then both cards in the hand should be played in any order. Player moves all the stated legs forward if there is a free notch and the leg won’t be torn off the body. It’s possible to move the bug’s body forward as well at any time during the turn if it won’t cause a leg loss.

When everyone finish playing cards – by verbal understanding cards can be played all at the same time or by turns – players discard them and draw the new ones. The game is over when at least one bug has passed the finish line by its body, which should be located at the three last track sections. If such a bug is the only one, its owner wins the game. If there are several challengers, the winner is defined by the location of legs.

Skillful players can play 4 cards instead of 2 during the turn. In that case each player draws 4 cards from the stack, leaves one in the hand and gives three to the next player, chooses one from the derived cards and gives two, and at last gives one and keeps another. By the way, players can choose the convenient design: there is a forest glade with an apple at the one side and a space station with a big red button at the other. Bugs are also two-sided, well-matched to the game field. Of cause, nothing impedes robot-bugs to land on the Earth as well as common insects can visit a space station, it will be even more interesting.