European Union: The Board Game 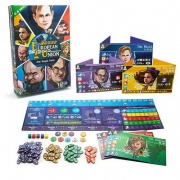 Essen 2015: European Union: The Board Game (Big Fun Games) from Cliquenabend on Vimeo.

European Union: The Board Game is a game for 3 to 7 players (or 3 to 5 players for the basic version). Each player takes the role of the leader of a European political party; each party has different policy preferences and special abilities. Players have to try to get the proposals that are most advantageous to them approved, whilst securing the maximum number of influence points that they can in each round. The game is played over three rounds, which simulates the increased membership of the European Union over time. The player with the highest number of influence-points at the end of the game wins.

During the game, each player uses their influence points to secure voting powers by bidding for Member States in the Council of the European Union (the Council) and Members of the European Parliament (MEP) (the Parliament), if playing the advanced version. The party with the highest bid also becomes the President of that institution, i.e., when bidding for the Member States in the Council, the highest bidder becomes the President of the Council. The President is a powerful figure with the ability to set the agenda for each round, chair discussions, and call votes.

Players can lobby other parties (players) to lend their support or help block proposals, taking into consideration their preferred policies and special abilities. Alliances can also be formed to further a player's objectives. Players can make deals using influence points or verbal commitments at any time during the game. However, the President Card, Party Cards, Member State Cards, and MEP Cards may not be transferred or traded.