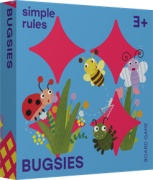 Bugsies is a fast and easy game for the little ones in which you need to be quick and sharp.

Wooden chips representing butterflies, bees and ladybugs are sitting on the colored petals, and players are holding them by their string tails. The player who holds a wooden spider cup throws the dice, and the hunt begins!

The leader throws the dice in the middle of the flower field and tries to catch the bug that was shown on the dice while the bug is still sitting on the petal. The player that is holding this bug needs to quickly figure out that their bug is about to be caught and straightway pull it away from the petal. The leader throws the dice and tries to catch the right bug until they succeed. When the spider, finally, gets the bug, the player whose bug was caught passes the string tail to the leader and takes the spider cup to become the leader in the next round.

The game has three rule options, three different levels of difficulty. You can throw one die with colors and hunt for those who sit on the petal of the given color. It's a little harder to react to the die with the colors and shapes of the bugs. And for the advanced Bugsies, there is an option with two dice. Here the task is to combine given colors and shapes.

The game ends when... in fact, it doesn't have to end. You can take a break when everyone has played enough and every player got a chance to be a spider. Thank each other for the great game, rest a little, and come back to Bugsies.