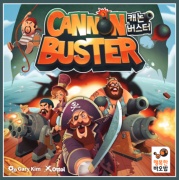 The fight for the gold-filled treasure island is about to begin! Ships will fire cannons at each other while pirates use their special abilities to gain as much gold as possible. The player who controls the most pirates and has gathered the most gold by the end of the sixth round will be named the new master of Treasure island.

Cannon Buster is based on Koryŏ, but developed as a family game with more player interaction. In more detail, in each of the six rounds players draw cards based on the round number, then place three cards from their hand in front of them, with all players revealing their cards simultaneously. Players then check to see who has a majority of each character, using their majority effects as desired and firing cannons.

After six rounds you determine a winner by checking gold coins and the number of character tokens in a player's possession, with additional points being given for possession of antique cannons. Whoever has the most points wins!