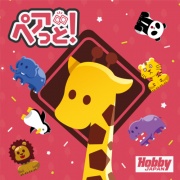 The animals have escaped from the zoo, and you want to recapture them before other zookeepers do!

Your goal in CAPCHA! (ペアっと！) is to be the first player to capture either all seven different animals or four animals of the same type. The deck consists of 56 cards, with eight copies of the seven animal types. To play, you have a 3x3 field of animal cards face down on the table. If you reveal an animal that matches a card in hand, you've made a match, can use the special effects of the card, and can keep looking.

You can also make matches on other players' turns, depending on the cards you hold. The 3x3 field of animal cards is replenished at the end of each turn, so keep track of who lies where if you want to be a capture captain.