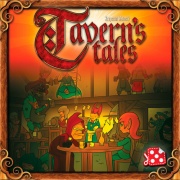 I have met a young noble while traveling. It seemed that he has everything anyone could ever want: son of a wealthy prince and highlander, descending from the famous winemakers, heir to the fortune, chief to the conscript army of the east flank, university scholar, educated, handsome and desired by ladies of all ages... And somehow there was always some kind of melancholy and sorrow written on his face. Once during shared meal, the noble confessed what grieves him: he never tasted what real adventure is. He heard tales of heroes and journeys – he wanted it himself but did not know how to begin. So I helped him by taking him to the Adventure's Gate, notorious inn where you can find adventurers ready to brave the world.

And this is how it begins...

Tavern Tales is a card-game in which players build their decks on their own. Their deck consists of adventurers who crave fame and, well, adventure. Each of 15 characters in the game possesses their own unique ability, so the choice of characters that the players recruit has direct impact on their win chance. You need to choose your party members so their abilities complement each other. Although rules are easy, winning the game is not. Players have to demonstrate their strategic thinking, long-term planning, and ability to react to the other players' moves.

The game is divided into nine rounds. In each round, each player performs their turn. During this turn, player must perform two out of three available actions

Thanks to synergy between cards, players try to recruit as many characters as possible and complete as many quests as possible. At the end of the game, players earn prestige points for characters met during the game and for completed quests.