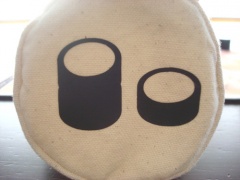 
Murus Gallicus is a two-player breakthrough game in which players try to create impenetrable walls of stone reminiscent of Julius Caesar’s Gallic Wars.

The game is played on a rectangular board consisting of an 8x7 array of cells. Each player starts with a set of 16 tokens referred to as stones; one light set and one dark set. The board is placed between players so that there are seven rows and eight columns. To start the game, each player takes a set of stones and stacks two stones on each of their eight home cells; their nearest row. The Roman player uses the light set and goes first. The Gaul player uses the dark set. Players alternate turns.

The basic units of the game are towers and walls. A tower consists of two like-colored stones in a cell. A wall is a single stone in a cell. Only towers move. The main function of walls is to block the opponent's movement and secondarily they act as stepping stones which can be used later on to create new towers. Towers move by sowing as in Mancala with a stacking limit of two and only like-colored stones may be stacked. Each of the destination cells must be empty or contain a friendly wall. Tower stones can be used to remove adjacent opponent walls. This is done by sacrifice! Material remains equal throughout the game but slowly erodes for both players as players defuse threats. A player is stalemated if unable to move/sow or sacrifice at the start of his or her turn. Going flat out (stalemating yourself) in order to stalemate your opponent can be very satisfying.

Murus Gallicus is a game of balance, space and timing. Players must balance defense and offense. By controlling the board's center, a player can gain mobility. Players must wait for the right moment to squeeze through the opponent's defense. The endgame can be very tense thanks to the balance in material.

There are several useful structures players can employ. The Gallic Wall consisting of orthogonally connected walls (and sometimes towers) requires the opponent to go around the wall or blast his or her way thorough using a sacrificed stone. The Chariot consists of a tower, wall and empty space aligned. By sowing the towers stones in the direction of the wall, the two-celled formation glides forward. The battering ram consists of two towers and an opponent wall aligned. By sacrificing a tower stone, the opponent's wall can be removed. The remaining chariot formation can then move through the breach on the player's next turn. Lastly, a siege tower is a tower sitting within striking distance of the opponent's home row. Such a tower can tie up many of your opponent's pieces.