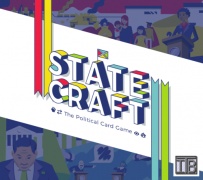 Statecraft is a game about politics. Build a political party in a familiar but fictional world, recruiting politicians to your cause, developing your manifesto of support winning ideas, campaigning for the support of the public and firing off slavos of slander and sabotage at your cunning rivals, and surviving catastrophic events that shake up the nation you’re playing the game of politics in.

Every game of Statecraft is different, with more than 150,000 different starting set ups, with different voters, leaders, scenarios, politicians each game, as well as different policies, actions, events and emergencies coming to the fore during the game.

Each game of Statecraft starts off with selecting a scenario, which represents the current events of a fictional nation, and with players selecting their political party’s leader, who’ll form the central character of your party’s team.

Players then manage their cards to carry out a series of political ‘manoeuvers’ during their turn, whether spending cards recruiting new politicians to their party, using cards announcing new policies with their newly minted team members, campaigning for the support of a key demographic or dialing their favourite cable news network to divulge some damaging slander about their opponent.