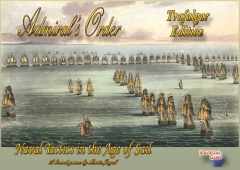 
Admiral's Order: Naval Tactics in the Age of Sail is a simulation of naval engagements between ships-of-the-line and frigates in the Age of Fighting Sail. The focus of the game lies on the wars between Britain and France and her allies in the years 1775 to 1815. The Trafalgar expansion allows players to recreate the dramatic and decisive battle between the British and the allied fleet at Cape Trafalgar, an engagement featuring no fewer than sixty vessels.

A game turn equates to a ½-hour watch on the day of battle. In each turn, players will play cards to execute sailing manoeuvres such as tacking, wearing or changing sail configuration in order to put their ships into position for devastating broadsides or even rakes on the enemy vessels.

In larger engagements ships are grouped together in squadrons and usually form a “Line of Battle”, a formation that provides the commander with the most control over his fleet. Using Admiral's Order cards players signal general commands to their squadrons ranging from "Form a Keel Line" and "Wearing in succession" to "Prepare for Close Action". Keeping the ships in formation and effectively deploying the fleet in the heat of battle while also retaining the initiative is the main challenge for a commander.

Occasionally, ships will engage each other in brutally destructive Close Quarter combat. In such situations the game 'zooms' into the action: Using a set of "Close Action" cards, players can employ grapeshot, grenades, carronades, and sharpshooters to wreak destruction on the opposing vessel’s upper deck. Through a clever use of grappling hooks and boarding crews it is possible to overcome the enemy's defenses to take the ship as the ultimate prize.

The Trafalgar expansion can be played by 2 to 6 players, and fighting the whole Battle of Trafalgar will take up a weekend.

The game is produced in a small, limited edition and comes in a hancrafted linen-bound box, including a wooden presentation box with 60 handcrafted, wooden ship models. Each ship with removable masts and ship names burned into each side.