W: The Board Game 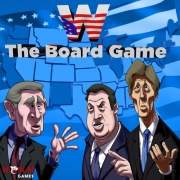 
November 7th, 2000 – The incumbent Democratic president Bill Clinton had served his two terms in the Oval Office and the Presidential race brought to the finish line George W. Bush, Governor of Texas, and Al Gore, the Vice-President of the Clinton administration. The race needed a photo finish and the swing state of Florida was the one deciding the winner. After a recount and a series of decisions by the Florida and U.S. Supreme Courts, George W. Bush became President even though Al Gore had an overall larger number of votes.

W: The Board Game is a strategy game for two players. Each player represents the staff of one of the two dominant parties in the United States – the Republicans and the Democrats – which are campaigning for the presidential elections. Each player will strive to influence enough States so that his candidate will have enough electors to gain the Presidential title. All but two of the fifty states have the "winner takes all" rule, so at the end of the game, players will add up the electors of the states which supported their candidates.

The game board depicts the fifty American states plus the District of Columbia. Each state offers a number of electors and a fund-raising value, and it is defined by its traditional affiliation (from Strong Democrat to Swing and to Strong Republican), by its population size and by the voting preference – the key to winning the elections. Each player will campaign easier in the states which traditionally support their candidate, but the key to winning the elections is usually in performing well in swing or unfriendly states.

In the beginning of the game, the influence on the map mirrors the reality of the first week after the primaries. Throughout the game, players will struggle to change the voting preference of as many states as needed to gain enough electors and they will also have to find the means to sustain a long and ruthless campaign.

The game is played over thirty turns, each representing roughly one week, from the moment each candidate won his party’s primaries until the Election Day. Every turn each player takes one action. They may conduct fund-raising to raise money for the campaign, they can seek endorsements from local preeminent figures which will later be used in key campaign moments, they can perform speeches to offer their point of view on major campaign themes and, most important of all, players will campaign trying to influence the voting preference in a state. Turn 10, 19 and 29 are reserved for debates, when the speeches delivered earlier will represent the key to winning the debate and gain a foothold in otherwise inaccessible states.

The twist of the game is that each player may campaign in a state only once as long as his opponent steers clear of that state. It is up to you to sacrifice a large state and perform fund-raising or to spend little and hope that the campaign dice will work in your favor.