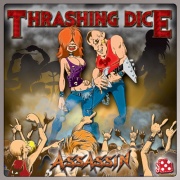 Take on the role of an aspiring metal band setting out to win over the minds and ears of metal fans everywhere! Train your band members, play concerts, compete for fans, release albums and dominate the metal charts! Perform the best at the "Thrash Awards" ceremony at the end of the game and claim the metal throne!

Each round you have the opportunity to go to one or more of the available locations on the board. For example: the guitar shop, the Rock Academy, the Metal Club, the radio station or the recording studio. You'll have to choose wisely: Do you start with playing a club concert to increase get your name out there? Or maybe better to rehearse a little more for the big concert on the weekend? Or is it time to finally upgrade your instrument?

During the game's six rounds you'll rehearse till you drop, play concert after concert, and build your fan-base. You'll record albums in the studio, give interviews at the radio station, and fight hard to reach the top of the metal charts. And at the final concert at the end of the game you'll give everything you've got! Afterwards, in front of a packed house, the highly coveted "Thrash Awards" will be given out. Who's produced the best album? Who has the best individual artist? And for the finale: Which band has achieved the greatest fame and will claim the metal throne? One thing is certain: The throne is only big enough for one!