Myths at War: Back to the Beginning 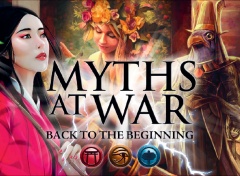 Myths at War is a strategy card game for two or more players who confront each other to determine the fate of a Mythology. Before starting a game, each player builds his or her own deck according to a defined set of rules and then faces other players to deem which Mythology is the most powerful. There are two ways of winning a Myths at War game: GOD OF GODS, by achieving a certain level of power or OBLIVION, by vanquishing your opponent. Myths at War mixes strategy and collection. Each expansion set will help you improve existing decks and create new ones.