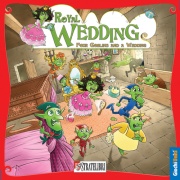 In the almost resplendent kingdom of the goblins, everything is ready for the nuptials of Princess Koncita. Well, almost ready... The preparations enrage the princess as everything seems to be going wrong for her. Koncita has a difficult character, and all around her hordes of terrified servants bustle about, attempting to satisfy her every tantrum, ahem, desire.

But even in the chaos of these preparations, while trying to dodge the possessions the princess flings at them (have you ever seen a flying chamber pot?!), the true nature of the goblins comes to the fore: Their infamous greed leads them to seek some small amount of vengeance not only against the princess, but against each other, too. Thus, in the excitement of the preparations, amongst the shoves and forfeits they have to put up with, maybe they will even manage to pinch a little treasure for themselves.

Royal Wedding is a fun-filled game for 2-8 disrespectful goblin servants!