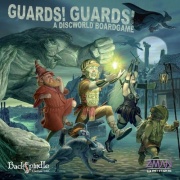 Guards! Guards! A Discworld Boardgame sees players taking on the role of newly recruited members of the Ankh-Morpork City Watch. With the Eight Great Spells missing from the Unseen University, the future of the Disc hangs in the balance. Each player is tasked with collecting and returning a number of the spells to the university before it is too late. Each player selects one of four Guilds to infiltrate: Thieves, Assassins, Alchemists or Fools. Their chosen Guild Card will give them a specific selection of the Great Spells to collect and grants them a unique Guild Ability which can be used to hinder their opponents. It is also used to mark the players Charm, Guild and Magic abilities, which can be developed throughout the game.

There are twelve locations on the board where players may charm (or bribe) volunteers to join them on their quest.
The characters are split into three Volunteer Decks each representing the range of inhabitants who might be found in different locations within the city: Lords & Ladies, Man & Beast and Shades & Shadows. Each Volunteer is assigned a set of skill attributes which can be used individually to protect the Spells, or combined with those of other volunteers and used to complete the Wizards Challenges - five tests of strength, brain, and worthiness which the runners must complete in order to enter the Unseen University with the Spells. A selection of enchanted scrolls, weapons, armour and magical items can be purchased by players to equip their volunteers and boost their attributes.

A number of volunteer cards carry the "Mark of the Brethren", the name of a secret society which aims to summon a greater dragon to the city in a plan to overthrow the powers that be in Ankh-Morpork. If a player holds three of these cards at any time, he may choose to call a dragon to a specific city quadrant. This effectively shuts down that area of the city until the dragon is driven off. (Handy if spells are located there that your opponents need.) Opposing players may choose to face the dragon individually or to co-operate with other players and send a combined squad of volunteers to see off the beast. (Dragons may also be called to the city automatically during the game on the turn of a fate card. If this happens, all players must send at least one volunteer to face it.) Members of the Brethren may also be secretly planted in city quadrants to operate as saboteurs.

When a player feels has recruited the right volunteers, he moves to collect and return the first required Spell (as marked on his Guild Card). You can send up to four volunteers on a Spell Run. Opponents may use magic, or Saboteurs if they have one in play, to try to stop a spell run. If all (or any) of your runners make it to the Unseen University, they must attempt one of the Wizards Challenges (resolved by totalling a specific attribute score of the successful runners, with any bonuses gained from items or magic and a dice roll). If successful they have returned the Spell. The volunteers used are seen to have fulfilled their duty and are discarded. The player then goes on toward his next spell (recruiting new volunteers along the way). The winner is the first to return the five Great Spells shown on his Guild Card. Being set in Ankh-Morpork, many other random hazards face players, but we don't want to spoil the surprise and tell you everything! Where's the fun in that?

The 2012 revised edition of Guards! Guards! A Discworld Boardgame follows basically the same format as the 2011 first edition with a number of cool amendments.

Firstly and most importantly the Rule Book has been completely restructured, FAQs from fans have been answered, lots of really helpful diagrams have been
added and a 'What a player can do on their turn' page at the back of the Rule Book is an excellent inclusion.

In addition there have been some clever minor rule amendments. The first one being when a Dragon is summoned it is placed on a Guild House and then may
be made to interact with the Luggage. The second one is that players can now purchase additional Attribute Points to boost their Character and make it easier to win. The final change is on Final Spell rolls. If a player succeeds with one of the two rolls on the first attempt, they do not have to re-roll for this target, only the failed target roll on their next turn.