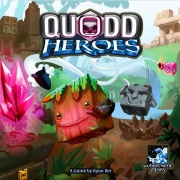 Quodd Heroes is a fast-paced modular, scenario-based adventure board game that plays like a combination of Super Smash Bros., Mario Kart and Legend of Zelda all wrapped into one. Whether it’s a simple point-to-point rally-style race, capture the flag or a quest to uncover hidden secrets each game is filled with unexpected events, lots of player interaction, ever-changing boards and a dash of mayhem.

While you work to complete the scenario’s objective(s), either on your own, cooperatively, or against other players, game boards which are laid out in grids present obstacles like walls, raging rivers, chasms, moving platforms, rotating board sections, trap doors, tunnels, teleporters and more. As you navigate the world you create new obstacles and shortcuts while battling your opponents by pushing them into pits, blocking their paths and fouling their plans.

As you explore the world you will find food, runes, items and pets in the form of cards. These cards enhance your abilities, slow your opponents and modify the world around you. If you use your movement skills and cards strategically you'll emerge as the greatest of the Quodd Heroes.

1. Play cards (power up): Play as many cards as you like from your hand. Power up and alter the board prior to movement.

2. Movement Phase: Perform your natural tumble by turning your hero miniature over into an adjacent space, activate any board elements on that space, then activate the movement skill associated with the side of your character that is now facing up. Move up to your maximum distance with that skill in any direction you like.

3. Play card (recover phase): You many play any additional cards you like during this phase.

4. Exploration phase: draw cards from the lineup of cards or the top of the deck equal to your exploration value

At the end of each round an upkeep phase includes:

- moving board elements and animals
- play a world event card that effects all players
- Adjust round tracker (in timed scenarios)
- all heroes upgrade their hero by selecting an upgrade tile and placing it in their upgrade track.
- First player mark passes to the left