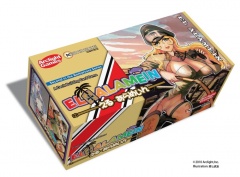 Loved Barbarossa and can't wait to continue your battle? Just entering this fictional WWII Anime Universe for the first time? Welcome aboard! We are not only bringing you an awesome fully translated game from Japan, we are also commissioning new art by the incredible artists of El Alamein and Barbarossa. With your help we will be able to produce loads of new art for this already beautiful game!

El Alamein takes the established rules of Barbarossa and expands them to include new game mechanics such as the British Counterattack; Right after taking a city when you think it’s safe to rest, beware! The British may launch a counterattack against you!

If you are unfamiliar with Barbarossa or El Alamein, El Alamein is a deck building card game for 2-5 players (loosely) based on the battles of the German Afrika Korps during World War II. While it is an extension of the game Barbarossa and picks up where Barbarossa left off, El Alamein is a stand alone game. Each player takes on the role of one of General Rommel's subordinates and will start with very basic cards representing the main forces you command. During the game, players will add reinforcements to their initial 8-card decks, fight battles, and attempt to complete military objectives such as defeating enemies and capturing cities

The game uses an in-game deck building mechanic, similar to other deck building games of this style, where each player starts with a small deck of resource cards. During the course of the game players buy more powerful cards from an open card pool to build their decks.

Your ultimate objective is to conquer the British army's main stronghold in El Alamein and then their final bastion in Alexandria! When the game ends, the player with the most Victory Points is the winner! Can you withstand the British army's onslaught under harsh desert conditions, turn the tide of battle, and push into the Suez?