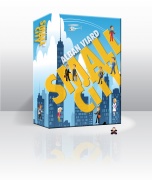 Small City (SC) is the last game of the city building trilogy that started with a small family game Card City (CC), then a puzzle game in 3D called TownCenter (TC).
Small City is a complex tile laying game that is a board game version of SimCity1.0 but with euros twists and other mechanisms that were used in CC and TC
With the SC, the players have to secure enough Votes to be reelected as a mayor. To get votes, the players have to host citizens (88 mini-meeples) in the most suitable residence areas. To build suitable environment, the players have to build Cultural buildings that can only be built with raw materials. Of course, the factories are producing raw materials if you place your citizens in the factory. There are also commercial tiles that allow you to get money, allow you to make some trade with your raw material.
Like in all the games in the trilogy, the automatic evolution mechanism is still the same. If you have more cultural build that surround a residence, this residence is going to evolve (5 levels of evolution). If you have more residence tiles that surround a commerce tile, this commerce tile will become bigger (4 levels of evolution). If you build industrial buildings around factories, these are going to evolve again (3 levels of evolution). The bigger the tiles are, the more powerful they are. If you fulfill with citizens a residence of level 4, you will get 1+2+3+4 Votes each Round. If you have a commerce tile of level 3, you can make more trade and have more possibilities to earn money. A factory of level 3 is the only one that is able to produce black raw material, which allow you to build the biggest cultural buildings (remember the only one that allow you to make the residence tile evolved)
But players have also to take care about the pollution, each citizen pollute for 1% and each time the players produce 1 raw material in his factory, it pollutes again by 1% .The only way to control the pollution is to build parcs... Or to send your meeple to opponent cities to get advantages of their niiiiiice buildings... Each Turn after one player has reached 10% of pollution, the player who has polluted the most HAS to kill one of the citizen who is living in his city, creating a cemetery that also takes some room.
The player-mayor might also want to make promise to their citizens to be reelected. If the promise is kept at the end of the game, the players will score new vote points, but it the promise is not kept, the players will loos vote points as well...
Some other buildings like the Metro Station, the Fire Station, the Police Station, the CliniC and the University are buildings that also have special powers : For example, with the Police Station, you can protect some of your buildings from opponent citizens. With the CliniC, you are protected from the pollution effects.
At the beginning of each turn, we placed at random some Action Cards in Circle (the exact number depends on the number of player). The first player can choose for free one Action. Then the second player can choose for free the 2 Adjacent cards, or have to pay $1 to skip one card, or pay 2$ to skip two cards and so one. We start from the card chosen by the last player and one card can only be chosen one time of course...
A BIG character Meeple is also going to visite the city of the first player. This Meeple blocks one street of your city and you can not build or make evolution in the two squares adjacent to this street...
Finally, there are 2 level of complexities , a Normal Game and an Advanced Game, and two different city lay out, one with 100 squares and another one with the sea that only has 80 squares.
There are 4 Victory conditions : You can play the normal game that means having the most Vote points. This is the Vote Victory. you can also want to play the Economic Victory. The wealthiest player will win the game, so the commerce and the factories are more important. Pollution is less important... You might want to play the Cultural Victory conditions as well. Then the player with the biggest area of Cultural building is the winner. And finally, you might want to play with the Citizens Victory condition. The player with the most Citizens, (the biggest city) is the winner
Like all the game of the trilogy, I added a Solo Variant which keeps tension, whatever Victory Conditions the player will choose.
The game lasts 30 minutes per player.
The game will be released for the Essen fair ONLY. The price is 60€. There are more than 280 tiles, 88 mini meeples, 44 cards, 4 player boards, 1 commun board...and more over, the print run is very limited to 750 Boxes that we finally ended to assemble here and that we will bring to the fair in October.
For the fans who can not make the fair, I can ship the game directly to their doors...
Add 10€ to Europe, and 15€ to the rest of the world.
I will provide English, French and German Rules and the game components are language independent.
The boxes MUST be preordered at ageofsteam2012@gmail.com, like the past year.
Alban Viard will be on the same booth that LUDIKBAZAR.
Dies ist ein Spiel-Datensatz. Bislang wurde noch kein ausführlicher Spieltest hinterlegt.