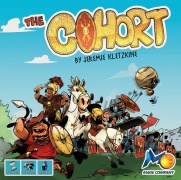 Essen 2016 Videovorstellung: The Cohort (MAGE Company) from Cliquenabend on Vimeo.

It is time to polish your armor and sharpen your sword, for mighty Caesar has called for his legions to assemble.

The Cohort is a fast-paced card game for 2-6 players in a race to be the first to assemble a Legion and show Caesar you are the greatest of his commanders.

Legions are composed of 3 different Cohorts, each made of one of seven different types of units: Praetorians, Catapults, Centurions, Sagittarii, Equites, Legionaries and Velites. During a turn, you draw two cards, keep one and give the other to a player of your choice. You can keep that card in your hand or trigger it and create a Cohort. Be careful though, for the troops are rowdy! Until a Cohort is complete their behaviour works against you.

So snap them into line as quickly as you can, disrupt the plans of your fellow commanders and show Caesar that your Legion is the greatest in all the Empire.