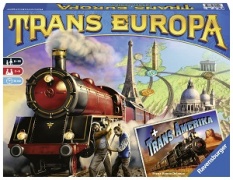 Trans Europa & Trans Amerika includes two simple railway games in the same box that use the same rules, but are played on different maps, which provide different playing experiences.

In each game, you start each round of play with a secret set of five cities strung across either Europe or the U.S. (depending on the side of the game board you're using) that need to be connected by rail. On your first turn, you place your starting station somewhere on the game board. On each subsequent turn, you place either one or two rails that connect two points on the board; you can place only one rail if you're crossing a river or a mountain ridge with that rail. All of the rails that you place must touch your starting station or connect with other rails in a network that touches your starting station. Thus, each player builds their own network initially, but as soon as those networks connect, you can place rails anywhere off that connected network

As soon as a player connects all five of their cities in a network, which could happen on another player's turn, the round ends. Whoever has connected all of their cities scores 4 points; each other player scores 0-3 points depending on how many rails they would need to place to connect all of their cities. You then clear the board, shuffle the cards, and play another round. The first player to score 13 or more points wins! The player who can make the best use of the other players' networks is generally victorious.

Trans Europa & Trans Amerika includes 19 special cards that can be used to provide more variety in gameplay. At the start of a round, reveal one of the cards; the effect of this card applies to all players during this round, perhaps with everyone discarding their rose card and needing to connect only four cities, or having a mountain pass count as only one rail played, or placing three rails on a turn, or revealing two of their cards so that everyone can see where others are going in particular parts of the map.