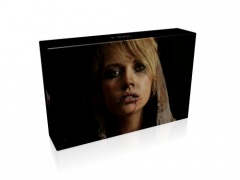 
Z. is a 2-4 player card battle game that pits Survivors against the Fallen (zombies). It combines elements of Magic: The Gathering and other card/tabletop classics with video game sensibilities and a horror movie atmosphere.Each new match allows the players to create and live out their own zombie horror film. Every card in Z. is a high quality image featuring real people and real horror makeup/effects in place of 3D art or illustrations.

In Z., the Survivor and Fallen players take turns playing new cards from their hand, which are drawn from their deck. These can include new characters, weapons, traps, etc. Additional resources needed for playing cards are generated automatically at the beginning of each turn, but may also be manually increased or altered through various gameplay mechanics.

(Since the Fallen cannot “think” and strategize per se, the Fallen player not only controls his or her units directly, but also acts as a sort of director for the overall events of the game . Many of the Fallen’s cards and especially Killstreaks can modify the core rules of the game.)

In the middle of the play field are three Location Decks, each one representing a unique setting (Cabin, Police Station, Hospital, etc.). Everything in Z. revolves around these Location Decks:

-Survivors must send out characters (units) to search the Location Deck for Supplies, items, other units, and objectives.
-The Fallen must simply wipe out the Survivors before they complete their objectives, regardless of what mode is being played.
-Survivor and Fallen units that occupy the same Location can encounter (attack or use abilities on) each other.

The cards found in each Location Deck are also themed after that Location, adding a greater variety to the gameplay and types of cards available. Not all Location Deck cards are Survivor-friendly, however. These Locations are usually overrun with Fallen, as well as other dangers and obstacles.

The Z. Year One "Core Set" includes over 450 cards, with all six Starter Decks for the Survivors and Fallen, plus the first Location Set.