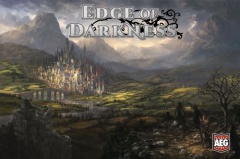 Edge of Darkness is the third Card Crafting Game from Alderac Entertainment Group designed by John D. Clair. Edge of Darkness combines Card Crafting, Worker Placement, shared deck-building, and a whole new Threat Challenge system in a medium-weight euro-style boardgame of 60 to 120 minutes for 2 to 4 players.

Players are the heads of powerful guilds in the City. Each Guild vies with the others to become the leaders of the City in a desperate struggle against great evil. But the Guilds must also work together because the dangers facing the city can harm them all.

The Guilds exert their control in the city by sending agents to various locations where they can generate resources or abilities and enable the Guild to take actions. Guilds grow in power as they maneuver their agents and loyalists into positions of importance in the districts and organizations of the City. Over time the Guilds can seek to create synergies between the places their agents have been assigned and the tendrils of influence the Guilds have connected to the City's infrastructure.

To win a Guild must have the most power in the city when the game ends. Power is gained having the allegiance of important citizens and nobles, by accumulating wealth, and by undertaking actions beneficial to the City such as defending it from external and internal threats.

Here are some highlights of the mechanics in the game: