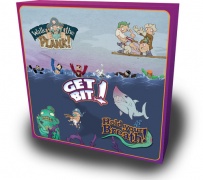 
This Collectors Edition of Get Bit contains Walk the Plank and Hold Your Breath. 3 games in one in a great "Dominion-sized" commemorative box. Only 1,000 of these will be made.

Included in each copy is a bonus chipboard with a newly designed pirate ship, an additional "Captain" Stand Up Starting Token, and even some Hunger Tokens to go with the now included "Sharkspansion" for Get Bit. The 3-in-1 game will include the bonus Sharkspansion for Get Bit, that includes the Hunger Tokens and the player cards for the Shark player, allowing one player to play as the Shark in Get Bit!

The first game released was "Get Bit" where pirates are swimming away from sharks. The second game was a prequel called "Walk The Plank" where the worst pirates on the ship are pushed into the sea. The last game "Hold Your Breath" is the last chance for players to survive.

Get Bit! is a card game where players are competing to stay alive as the others are being eaten by the shark.

The order of the swimmers is determined by simultaneously playing cards face-down then revealing the values. The number on each player's card determines position in line (higher numbers in front, lower numbers in back), however ties don't move. The swimmer at the back loses a limb to the shark and is flung to the front of the line! The process is repeated until only two swimmers remain on the table. When this happens, the swimmer at the front of the line wins the game!

In Walk the Plank!, players represent the worst pirates in a captain's crew. The captain has rounded you all up because you're all lazy and stupid and simply not worth the rum and loot you get paid. That said, the captain has decided he's willing to keep two of you in his crew. To prove you're worthy, you will fight amongst yourselves, trying to shove other players' pirates off the end of the plank while keeping yours alive!

In game terms, each round players secretly stack three of their ten action cards, then they take turns revealing and playing those actions one by one no matter what's gone wrong between the planning and the doing. If you plan to have a pirate shove someone off the plank on your third move and all he sees are his own best mates, he will still shove away! Some cards bear a skull on them, and these powerful cards must remain on the table the round after they're played, but otherwise players then pick up their action cards and start a new round. As soon as two or fewer pirates remain on board, the game ends and the owner (or owners) of these pirates win! Watch out, though, as sometimes every pirate will end up in the drink, which means that no one wins other than the sharks circling in the water below...

In Hold Your Breath, the game is played in two rounds. In the first round each player may dive deeper, providing they have the "Swim" and "Air" cards to do so. Players press their luck each turn since it is the pirate who dives the deepest in round one AND resurfaces in round two who is the winner. Players can play "Panic", "Shark" and other nasty cards on the other players, slowing their progress. In the second round each player struggles to reach the surface before they run out of air and therefore decide to take a rest (aka LOSE). Most of the pirates may not make it back to the surface, but the one who makes it back alive AND dove the deepest is the winner.