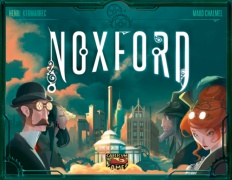 Welcome to Noxford, a timeless city in perpetual construction that extends continuously following the rhythm of the gears that hold it. Each player leads a crime syndicate and relies on their lieutenants and henchmen to become the most influential around rich districts of the city.

Set in a Steampunk universe, Noxford gives you the opportunity to take control of a Victorian city made up of cards. In turn, players place in the game either cards depicting influence of their syndicate, or neutral cards representing rich districts (victory points) as well as barracks (which cancel syndicate influence around those areas). Cards must be placed so that they touch at least two cards already in play and must have at least two edges aligned on the edges of the cards that it touches.

The game ends when a player plays their last syndicate card. Then, players wins neutral districts if they have more syndicate cards than their opponents around. Neutral districts give 1 victory point per symbol on them, and a +2 bonus if the district depicts the favorite field of the player's syndicate. The player with the most victory points controls the city and wins the game!