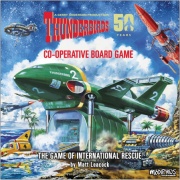 Planned for release in Q4 2015 to celebrate the 50th anniversary of the cult TV show, the co-operative game Thunderbirds will feature the iconic Thunderbirds machines and a high octane world full of disasters for players to come to the rescue.

Set in the year 2065, Thunderbirds follows the exploits of International Rescue: a secret organisation committed to saving human life, secretly founded and funded by the millionaire Tracy family. International Rescue has a host of technologically advanced land-, sea-, air-, and space-rescue vehicles and equipment ready to launch at a moment’s notice.

Racing to the rescue from a secret island base beneath the luxurious home of the Tracy family somewhere in the South Pacific Ocean, International Rescue defies government spies and criminals who want the secrets of their incredible machines for their own. To combat this threat, Lady Penelope, the Thunderbirds’ aristocratic English secret agent, and her chauffeur Parker lead a network of agents to uncover those behind the disasters caused by deliberate sabotage.

A criminal mastermind known as “the Hood”, operating from a temple deep in the Malaysian jungle and in possession of strange powers, often engineers events to allow him to spy on the Thunderbird machines with the goal of selling their secrets to the highest bidder.

Thunderbirds is a cult 1960s British science-fiction television series, created by Gerry and Sylvia Anderson. It was produced using a combination of marionette puppetry and scale-model special effects, which was dubbed “Supermarionation”. Two series, totaling thirty-two 50-minute episodes, were produced, along with a film using the same techniques.