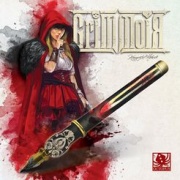 Once upon a time a good and virtuous girl found her prince charming and lived happily ever after. Good bedtime story. But life isn’t a fairy tale, and what parents have told us often goes beyond the truth. Heroes of fairy tales had to fight for their rights, often in a brutal way...and they did not always win. Welcome to the grim world where a road lined with dead bodies of enemies leads to a happy ending!

The goal of GrimmoiR is to defeat the opponent's character. At the beginning of the game, each player chooses six characters and take five energy points; the randomly selected first player begins the first round with one energy point less. The first player chooses and puts one character in the front line on the table. Then second player places their first character in front of that character and second character in the back line, right behind their first character. The first player selects the next two characters, places one to the back line behind the already placed character, and the second to the front line on any side of already placed cards. Repeat the process until each player has six characters in the battlefield: three in the front, and three in the back.

Players take one action in turn. They pay energy points for the action. The action includes:

The game lasts until one of the players defeats all of the opponent's characters.