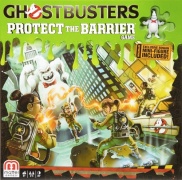 The evil Rowan is trying to break open the Durable But Not Impenetrable Barrier and release the dead! He's placed Paranormal Energy Devices (PEDs) all over the Mercado Building, and it's up to the Ghostbusters to find them and get them out before the fourth Cataclysm begins and the building is completely haunted.

Ghostbusters: Protect the Barrier Game — a new version of the Kinderspiel des Jahres-winning Geister, Geister, Schatzsuchmeister! — includes four ways to play: Basic Battle, Basic Battle with Rowan, Advanced Adventure, and Advanced Adventure with Rowan. Rowan is a special ghost figure included in this version that cannot be killed. When this ghost's card comes up in the deck, you draw the next card, then move it to that room. If that room becomes a haunting, this ghost automatically moves to the next room.