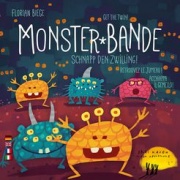 Monster-Bande contains 2 x 54 equal tiles with monster images. One set of tiles forms a face-down pile, the other one is spread out openly on the table. In addition, there are two dice. The faces of the dice show properties of monsters, such as horns, feet, color, numbers, etc.

Monster-Bande is played in teams of two or more players. One player on each team rolls the dice, then draws the top tile of the pile and has to describe the monster on it without saying any of the properties mentioned on the dice. The other players on the team have to identify the matching monster on the table. If successful, they take the tile and the active player draws a new one, etc., until the one-minute timer runs out. If the active player uses a forbidden word, the turn ends prematurely.

When all monsters have been assigned, the team with most tiles wins.

The game includes variants for younger players and for two or three players.