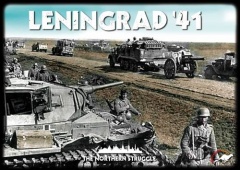 This is VentoNuovo's continuation of the system created for Moscow '41, now looking at the campaign of Army Group North in Barbarossa.

Players take either the German or Soviet Union forces and use colorful wooden blocks to simulate the forces they have involved.

Leningrad '41 uses the same basic game engine of Moscow '41, with a few tweaks and changes to suit the differing conditions in the north. The game brings new wrinkles in as well because the Germans have "allies" as part of their forces-- the small but powerful Finnish Army which sought to recover territory lost in the "Winter War" but did not fully match the ambitions of Germany at destroying the U.S.S.R.